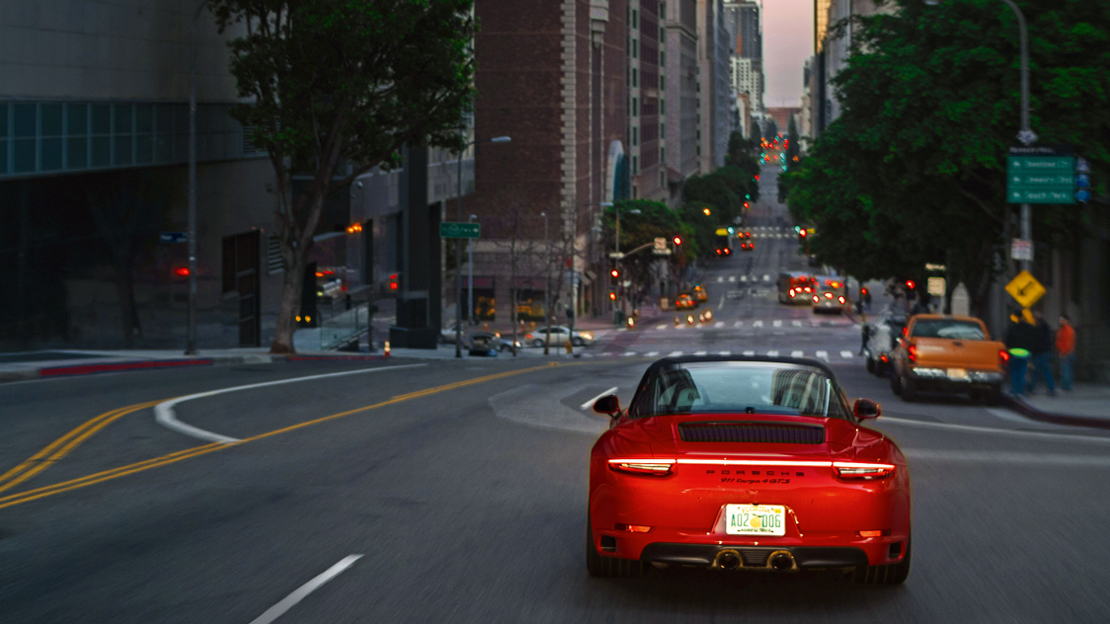 L.A. Woman, Los Angeles isn’t about anymore. Nearly half-a-century now separates the chasm between the time Jim Morrison’s The Doors rocked lyrics like “Driving down your freeways/Midnight alleys roam/Cops in cars, the topless bars/Never saw a woman so alone” to what the city is now.

Los Angeles is currently an excellent source of dance/club electronica. In this scene DJs rule, and one of the biggest names among them is German star Moguai.

In an article written by Ralf Niemczyk, titled Through The Night, and published in Porsche’s customer magazine Christophorus (No. 387), Moguai shares his story with the author, who joined him on a “nocturnal expedition to the coolest clubs in the city” aboard Moguai’s own Porsche 911 Targa 4 GTS. Moguai, you see, is also a Porsche fan.

The heavy iron door on Melrose Avenue opens as if by magic. Muffled beats pound through the night. A sign in the courtyard promises “Paradise” while cushioned seating outside a white bungalow evokes a lounge-like atmosphere. This studio complex is a hot address in Los Angeles. It belongs to Fernando Garibay, a music producer with Mexican roots whose clients include Kylie Minogue, Shakira, and U2. He also produced the album Born This Way with Lady Gaga. A creator of both electronic tracks and international chart hits, his work has been nominated for numerous Grammys.

Sitting at the mixer in the rear of the studio is Moguai. His real name is André Tegeler, and he comes from the German city of Marl in the Ruhr District. At one time he was the youngest journeyman butcher in Germany’s most densely populated state, North Rhine- Westphalia. Since the mid-1990s he has been traveling the world as a DJ. And now he’s a star. His “Punx” sound is sought after the world over, and he takes part in all the major electro festivals around the globe. His productions for the Sugababes, Girls Aloud, and 2raumwohnung have gone gold and double platinum. In 2014 he received the “Song of the Year” award for his club productions from the largest online music store.

Moguai and Garibay had planned to discuss their next project. But Paradise is suddenly teeming with musicians and sound engineers and Garibay has to handle a last-minute job for a successful Norwegian duo. That still leaves enough time for a few beats with the German DJ, who will later scout L. A.’s club scene in his red Porsche 911 Targa 4 GTS. “The musical landscape here has changed a lot,” says Moguai. “For a long time metal and hip-hop were the dominant forces.” But they’ve given way to entirely different, electronic sounds. Moguai can work on equal terms with a globally successful pop producer, which he says is like “controlled ecstasy.”

In his mid-40s, Moguai is already an old hand in the music business. He captured the imagination of the City of Angels the first time he played the Monday Social at the Playhouse on Hollywood Boulevard. It wasn’t love at first sight, but after dozens of shows and regular releases under house DJ deadmau5’s label, he decided to move from Germany to the US in 2015. Since then he has lived in Santa Monica with his wife, actress Birte Glang.

A hub of creativity and innovation
The L. A. music scene is a hub of creativity and innovation. “The city’s long-time musical tradition is going through all kinds of new developments,” Moguai says. The beaches of Venice and Malibu, the purple-hued sunrises, and the booming crossover cuisine are all added bonuses. Since the surfer hymns of the early 1960s, the city known as the entertainment capital of the world has been the musical counterpart of New York City. It’s home to the Beach Boys, the Doors, the Eagles, Dead Kennedys, Guns N’ Roses, and the gangsta rappers of N.W.A.—a limitless supply of musical icons. Current examples include Lana Del Rey and rockers like 30 Seconds to Mars. They’ve all earned an enduring place on the map of pop, while the legendary venues in the melting pot of L. A. have turned the city itself into a star.

Music has a long history on Sunset Boulevard, which winds through the hills of Hollywood as the Sunset Strip. Led Zeppelin celebrated their infamous parties at the Hyatt House, which was also where the Rolling Stones’ Keith Richards hurled a television set from the balcony. The former “riot house” has now morphed into the chic Andaz West Hollywood hotel, with a photo exhibition of its wild days currently on display on the way up to its rooftop terrace. Other hallowed sites from various pop eras are still found on the Strip. The Whisky a Go Go rock club, where go-go dancing originated, is now home to underground bands. The Viper Room is a scandal-plagued legend associated with the grunge era and former co-owner Johnny Depp. A rock and roll mystique is part of the very fabric of Los Angeles, even though 2018 now largely moves to the sound of digital beats.

In any case, the night here isn’t without end. Shifts at most of the clubs are over at three in the morning, at which point the party might—or might not—simply move on to someone’s home. But who can afford the occasional crash like that? “If you want to climb the ladder you’ve got to stay focused,” says Moguai. “Don’t stop moving for even a second.”
And that’s also why he’s a Porsche enthusiast. As a nine-year-old, he admired the neighbor’s 911; by 2002 he had purchased one for himself. The 911 Targa 4 GTS glides from the skate park in Venice Beach to the heart of the city, Downtown Los Angeles. The art deco neighborhood through which film noir heroes once prowled is now a study in contrasts. Just a few blocks separate the glass towers of the Financial District from the haunts of the homeless in Skid Row. Hard contrasts also mark the city’s new sounds. The grim tones of what the club scene calls bass music have been popularized and given polyphonic break-beat rhythms by Skrillex, a leading electronic artist. Clubs and events like 1 Oak and Low End Theory as well as A Club Called Rhonda stand for a new age of diversity. It’s still early in the evening but crowds have already gathered on Spring Street in front of Exchange LA, which, true to its name, once housed the city’s stock exchange. “I made my debut there in 2016,” says Moguai. Hard fusion sounds also fill this magnificent space and electrify its dancers. High heels, punk T-shirts, Mexican wrestling masks—there’s no particular dress code. But everyone and everything are constantly in motion.

Motion is the defining feature of L. A. in general. The clubs are spread throughout this sprawling city. Mexican food trucks are parked next to gas stations, where kids from the barrios fuel up for the night. Bass tones boom from loudspeakers in the cars. Decay is just another name for a breakthrough waiting to happen. The once neglected industrial region of East L. A. has rapidly developed into the Arts District, full of galleries and start-ups. “Faster, faster!” might well be the motto, with electronic music serving as the transmission belt for this progression. “The city challenges you. You have to be ready to let new experiences replace entrenched ideas,” says Moguai, stopping at a branch of the In-N-Out Burger fast-food chain. Bible verses are printed on the underside of its cups, following the wishes of the family that owns the company. Irreverent Los Angeles. Constantly redefining its pop stars.

Heading to Avalon
We finish our burgers and head to Avalon, a music hall whose architecture combines Mexican, fantasy, and art deco elements. Local DJs are putting on a powerful electronic display under flickering lights. Across the street are the headquarters of Capitol Records. A Historic-Cultural Monument, the round high-rise designed to resemble a stack of records is a testament to the early days of Los Angeles as a music metropolis. Greats like Nat King Cole and Frank Sinatra recorded songs in its studios. An enormous mural in the parking lot shows legendary jazz figures who seem to take an interest in what their descendants are up to. “The electronic scene has given rise to a different type of pop star than David Bowie or Prince,” remarks Moguai. “We’re working on digital material and recombining it in new ways. Our fans are also prone to a type of hero worship. But no one’s throwing TV sets out of windows anymore—that type of egotism is passé.”

As if to prove his point, the Avalon DJs disappear into a gigantic light show. Technology sets the tone here, as does music with hard breaks. When the last break-beat track ends right at three in the morning and Avalon empties at a startling pace, the cars on the lot begin to carry the party out into the night.