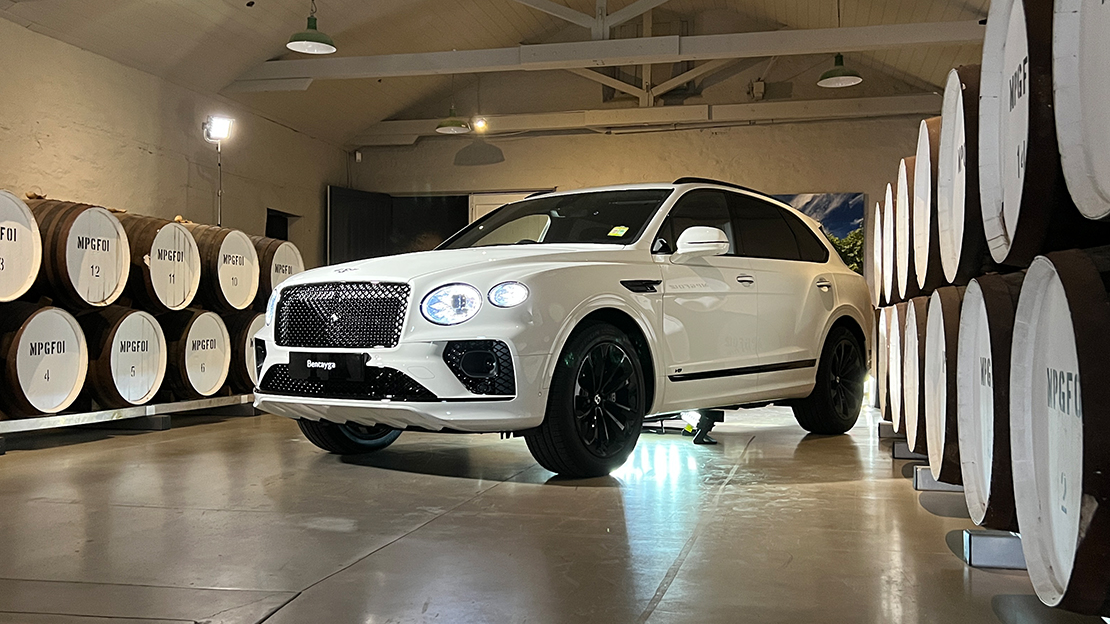 The ultimate luxury world is now really about getting exactly what you want. Yet the automotive world nowadays needs to focus more on streamlining production and development given increasingly challenging markets and restrictions. What do you do?

Bentley Motorcars ran us through six of their vehicles, two two-door Continental GTs, one Continental GTS Convertible, two Bentayga SUVs and a four-door Silver Spur. We tested two basic engine configurations, a V8 and a W12. And we talked about what people who want to match their car with their watch or their yacht or their racehorse can get done through Mulliner.

The variants we were driving, on road or on track, were at the highest level unless you decide to go bespoke through the Mulliner program. The Bentley Bentayga S, the Continental GT and the Silver Spur use a wonderfully throaty V8, while the Bentayga Speed, the Continental GT Speed and the Continental GTC Speed use an extremely smooth and powerful W12. In most car companies, the V8 configuration (if they have one) would be the ultimate in both luxury and power. With Bentley, you can go a serious step higher with the W12. The W12 was meant generally to provide more smoothness and quietness to buyers, it just happens that that comes with a lot more power. Rather effortlessly, which is the whole idea.

The differences between the Continental GTs and the Bentaygas and the Silver Spurs are rather obvious visually. The Bentayga is the SUV, so it is carrying a lot more weight with the mass a lot higher off the ground. The Silver Spur is what you would call a four-door sedan, except that it is really so much more. Even the word Limousine doesn’t do the car justice. Then the Continental GT is, as the letters say, a Grand Tourer. It isn’t a sports car, it is meant to take long distances in supreme comfort but still have the handling and power desired for almost any occasion. And yes, it is fun to play with on a racetrack.

So the V8. With these three different body types come three different levels of attitude and tuning. The Silver Spur is quiet and elegant, with the engine making the journey as pleasant as possible. You can adjust modes in all these cars, with Bentley Mode in the middle and then choices of more comfort or more sportiness or your own individualized set-up. Staying mostly in Bentley mode, which adjusts as it sees what is desired, the Silver Spur wafts through the air. The Bentayga S has more height, mass and weight and you need a little more foot angle to get it moving. The Continental GT S feels surprisingly light and fun for a car so long and heavy, especially when you compare it to the W12 which we will talk about next. The V8 engine sound is throaty and exciting, progressing from rumble to roar with sheer joy. Power comes on easily and smoothly but you know for sure it is there.

Then we move up to the W12 which is what comes in with the “Speed” badge. More power comes out of this of course, but that isn’t why they exist. 12 cylinder engines were meant for smoothness more than for power, because there is a rather significant weight addition. This also helps explain why the Continental GT S V8 felt more playful than the Continental GT Speed W12. There’s a lot more weight at the front of the car with the W12. The V8 felt more frisky (though remember this is Bentley-level frisky so still extremely calm and collected) while the W12 felt more firmly-planted. Having said that, it is extremely and almost unconsciously easy to get the rear of the W12 Speed to kick out a bit exiting tight corners. It is never really wild, and it catches itself smoothly with the help of all the electronics, but it reminds you that there is way more power and torque at your command. When running the cars at The Bend Motorsports Park in Adelaide, Australia, the Continental GT S V8 would slice through corners more smoothly (again, remember slicing as per Bentley) and then roar down the main straight. The Continental GT Speed W12 would be pretty planted through the curve until you hit the gas hard then it would flick it’s tail just a little and hurtle forward rather easily. 250 kph comes up to surprise you, and also the V8 driver just ahead of you that took that last curve so well.

So only two engine variants yet such a difference in character. The Silver Spur is about the most pleasant of journeys and the most relaxed and elegant of arrivals, especially from the back seat. The Bentayga is about choosing a bit more versatility and go-anywhere ability but still with proper comfort and ease. The Continental GT is more like the Silver Spur than the Bentayga, but with the ability to have much more fun. The V8 is about reminding you that Bentley has always been about racing and emotion and oh the sound of that V8. The W12, wherever you put it, just makes everything more effortless and …royal?