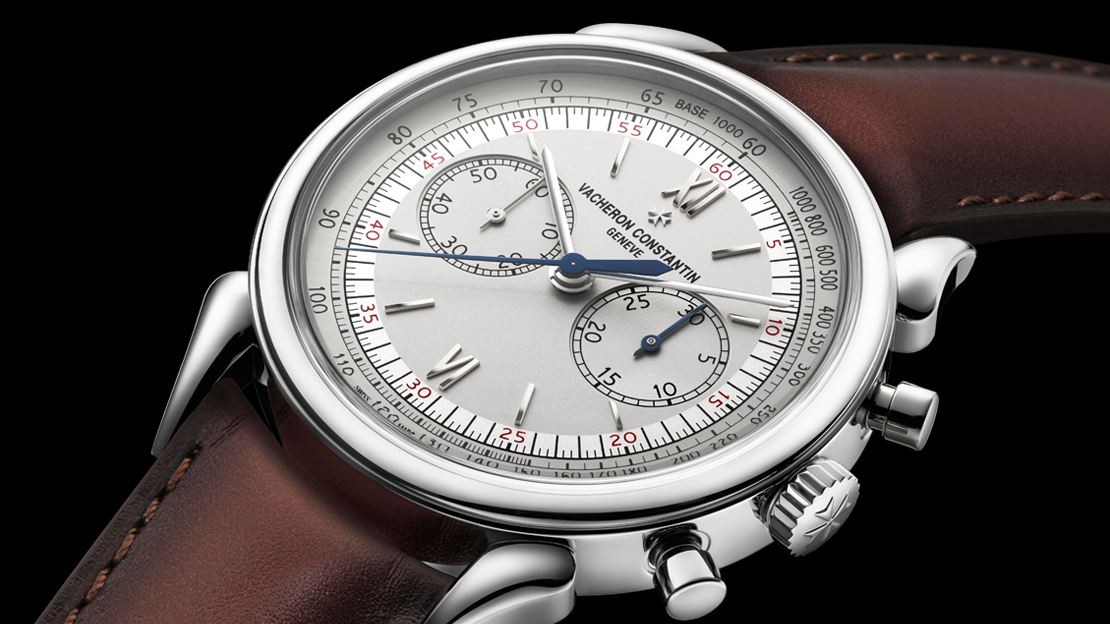 “CORNES de vache”— “cow horns” in English. And Vacheron Constantin’s seminal, much coveted, reasonably rare chronograph piece from 1955 was christened with such an endearing name because its fanciful lugs were shaped to sort of evoke cow horns. One could call them dainty, if only they weren’t actually, well, beefy.

This legendary Vacheron Constantin — the ref. 6087, to be precise — was the brand’s first water-resistant chronograph, a quality afforded mainly by a screw-down caseback and round pushers that let for easier gasket fitting. Not many were produced, according to the company (accounts put the number at less than 40), and so there exists among collectors a healthy hunt for the few which survived.

Vacheron Constantin in 2015 reissued the ref. 6087 in a platinum case, called the Historiques Cornes de Vache 1955 (or, in a succinct form, the ref. 5000H). The brand followed this up a year later with a version in an 18-karat pink gold case. Both were sensations.

By all indications, the new Historiques Cornes de Vache 1955 ref. 5000H/000A-B582, announced by the brand today, will not break this collectible tradition by virtue of it having a steel case. Like its two cotemporary reissues, the latest Cornes de Vache comes in a 38.5-millimeter-wide case that’s a bump-up from the ref. 6087’s 35-millimeter girth. The watch is also still rated water-resistant to 30 meters. It goes without saying it still flaunts its cow-horn lugs which, though a bit tempered, remain distinctive.

Incidentally, the “Historiques” in the modern Cornes de Vache’s name identifies the timepiece as belonging in Vacheron Constantin’s “heritage” collection which the maison created in 2006. The watches given with this tag means they pay tribute to the over 260-year — the longest unbroken operation in the watch biz — narrative of the brand by way of deliberately vintage-inspired aesthetics. To date, Vacheron Constantin’s Historiques models count the American 1921 and the Ultra-fine 1955, both resplendent reissues.

The same can be said of the steel-case Cornes de Vache 1955. The piece is still marked by elements identical to the original (these have been merely updated; the minute markers are now rendered in red, the central chronograph blued steel hand grows a bit thicker, the Roman numeral XII and VI have been elongated, and all the inscriptions are crisper). The new watch still has its small second register at 9 o’clock, a 30-minute counter at 3 o’clock, a prominent tachymeter scale and pump pushers. The dial is in a subdued shade of opaline gray accented by a white ring assigned to the minute track. The counters get snailing décor. The Roman numerals and markers are made from 18-karat white gold. A patinated brown leather strap completes the Old World vibe.

Beating beneath these elements is Vacheron Constantin’s cal. 1142, which is seen through the sapphire crystal window on the caseback. Wound by hand (just as the cal. 492 of the original Cornes de Vache was), this 164-part movement started out as a Lemania 2310, but is now produced in-house by Vacheron Constantin. It features a column wheel chronograph, has 21 jewels, operates at 21,600vph and stores power good for 48 hours when the mainspring is fully cranked. It is lushly decorated, with full beveling, circular graining and Geneva striping flourishes all done by hand. One of its screw heads is adorned by a Maltese Cross — Vacheron Constantin’s emblem. This movement, simply, is stunning.

Combined with everything else, it all makes the steel Historiques Cornes de Vache 1955 such a prized cattle.