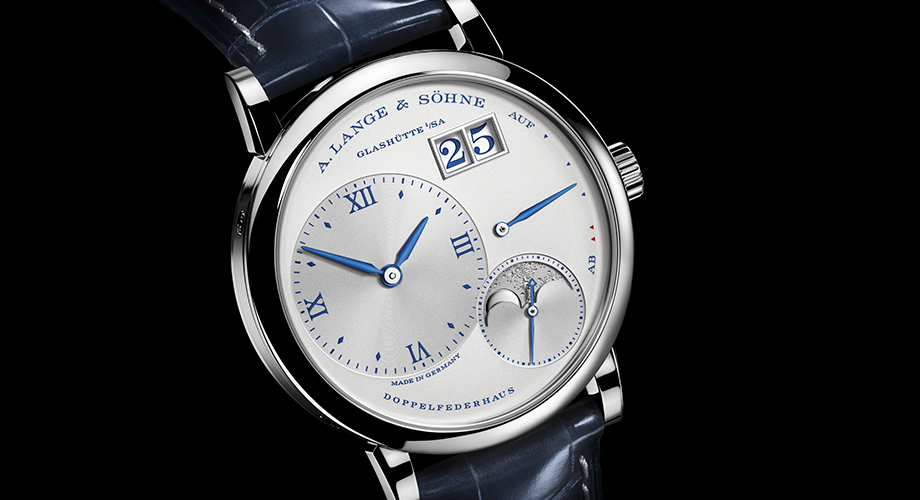 ONLY one piece of the puzzle is now left in the planned 10-model launch meant to celebrate the brand’s jubilee; A. Lange & Sohne has just released the Little Lange 1 Moonphase “25th Anniversary.” This is the ninth special Lange 1 brought out in this special year for the watchmaker.

A. Lange & Sohne is marking the 25th year since it rebooted operations on October 24, 1994. Suitably, it chose its Lange 1 to lead the festivities because it is this collection which has turned out to be its most definitive in the last quarter-century. And so the brand is presenting this year a new “25th Anniversary” Lange 1 model every month, lasting until October.

The Little Lange 1 Moonphase anniversary edition is wrapped in a white-gold case measuring a very tempered 36.8 millimeters. Inside this sits a solid silver dial with blue markers and blued steel hands. Staying faithful to the design code which defined the Lange 1, this special model also has one large, off-center subdial for the hour and minute indications, and a small second subdial. Like in most lunar displays, this smaller subdial provides the perfect spot for the moonphase indicator — a hand-engraved lunar disc peeking through an aperture. Its astronomic depiction — as marked by six stars, numerous tiny dots and golden moon — sticks to the silver-and-blue color palette of the Little Lange 1 Moonphase, as well as all the eight other “25th Annniversary” pieces.

Incidentally, the watch’s moonphase indication only needs to be corrected by one day every 122 years and six months.

Identifying this watch as being a handwound Lange 1 is a power reserve meter, which has a large blued hand, placed beside the hour and minute subdial. Above this is the brand’s signature oversized date display window.

A Lange & Sohne’s in-house cal. L121.2 beats within the case of the Little Lange 1 Moonphase. It is precision-adjusted in five positions and operates at 21,600vph. Two mainspring barrels allow it a generous three-day power reserve.

Comprising this ticker are 411 parts, 44 of which are jewels, eight are gold chatons. Its hand-finished plate is made from untreated German silver (which acquires its own distinct patina over time) and is contrasted by the lush décor on the balance cock. Engraved by hand here are flourishes filled in blue, including the inscription “25” that is rendered in the same style as it would appear on the oversized date display window.

Besides indicating the number of years since A. Lange & Sohne’s rebirth, the “25” has another historical significance to the brand. Fact is, it is important enough that the last “25th Anniversary” model is set to be unveiled on October 24 — the exact day of A. Lange & Sohne’s anniversary. When this watch is unveiled, its oversized date display will read “25,” the same date readout set on all A. Lange & Sohne watches presented during the brand’s 1994 re-launch. The reason behind this simple: Company executives at the time wanted the watches to reflect the present date when news photos about the launch event appear in the next day’s papers.