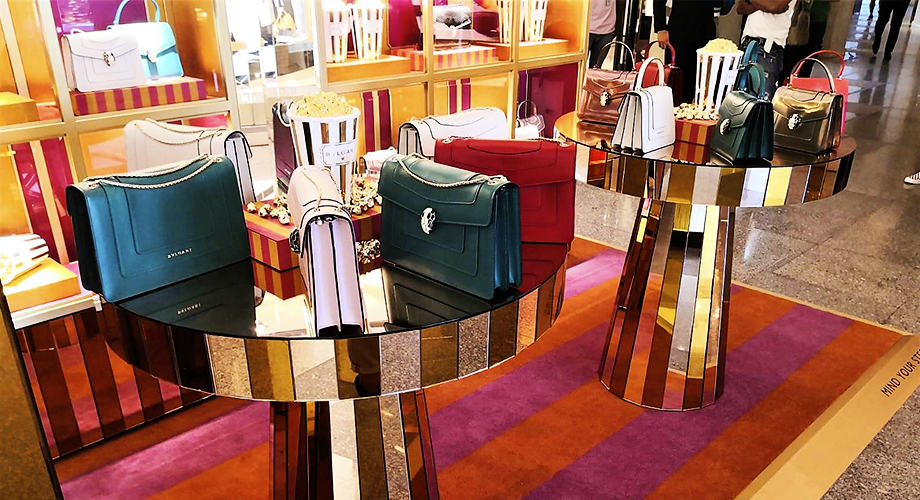 THERE’S now a carousel in the middle of Greenbelt 4. It’s colorful. It looks fun. It has certain 1960s-era cinema feel to it. It is the Bvlgari Pop (Up) Corn concept store, and it is meant to draw visitors into the world of the quintessentially Roman brand.

Created by Bvlgari’s design teams, the Pop (Up) Corn space puts the spotlight on the brand’s accessories and leather goods as these complement one another in the house’s collections. The popcorn component is meant to lend a literal cinematic feel to the concept, where “windows” are created by light, the two-tone stripes of popcorn boxes lend a playful vibe and neon lights redefine the space. Images of ticket stubs can be discerned. The Bvlgari logo is set up in lights. But, of course, the stars in this “cinema” are the Serpenti bags and accessories.

Cinema actually figures prominently in Bvlgari’s history. In the 1960s, Bvlgari’s storied Via Condotti boutique in Rome was the destination of big Hollywood stars; they would immediately go to the store the moment they set down their luggage at Cinecitta Studios. The era marked the beginning of a romance between the jeweler and stars of the silver screen at the time like Kirk Douglas, Audrey Hepburn, Frank Sinatra, Elizabeth Taylor and Richard Burton, who had famously quipped “the only word Elizabeth knows in Italian is Bvlgari!”

Now, besides highlighting Bvlgari’s affinity with cinema, the Pop (Up) Corn concept space also offers a glimpse of what to expect at the new Bvlgari store in Greenbelt 3 when it opens in 2020.