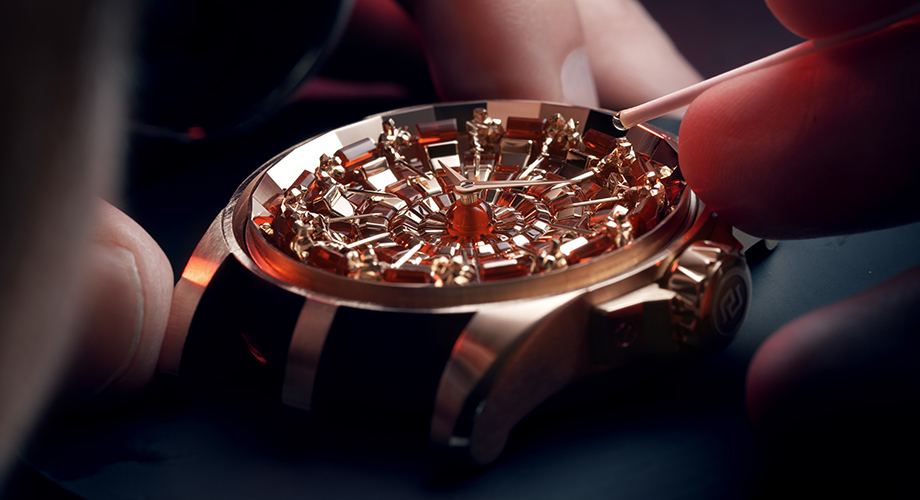 IT SEEMS Roger Dubuis’s obsession with Camelot continues; the watchmaker has just brought out its Excalibur Knights of the Round Table IV.

Just like pieces I to III, released in 2013, 2015 and 2018, the fourth iteration is a reimagined, even more exclusive take on the Excalibur — Roger Dubuis’s main collection. Each of the series was/is a limited-edition run; 88 pieces for the first one and 28 for the succeeding three. All are baroque interpretations of King Arthur.

Knights of the Round Table I (well, actually there was no “I” in the watch’s name, but anyway…) started off the visual theatrics by strutting plenty of engravings, texturing and inscriptions. Its 18-karat pink-gold case was also a substantial 45 millimeters wide, with a bottlecap-like bezel (although surely a bottlecap was not the inspiration for this) and a royal crest on the caseback. Its dial is a rather faithful rendition of the Winchester Round Table, which now hangs on the great hall of Winchester Castle in England. The dial mimics the table’s alternating green and off-white pattern that emanates from a Tudor rose in the middle. Yup, very royal English.

The round table motif in the second version of the Knights watch turned evocative rather than overt. Still, the watch was more period-correct with King Arthur’s times — meaning it looked medieval. This is largely due to a lot of bronze parts set against a black jade dial, creating a darker look than that afforded by the pink gold and green enamel of the first watch. Its white-gold case was subtler, too.

In contrast, the third watch went totally bling, to use a turn-of-the-century term. Returning to a pink-gold case (still 45 millimeters across), the dial has become a mix of gold and translucent bright blue enamel that is heavily faceted, so there’s loads of patterns and textures and gradations coming from the dial and the shimmering pattern of the “table.”

Knights of the Round Table IV picks up where the third Knight watch left off. The watch’s dial has an identical style to the previous version, but instead of a blue palette it now becomes a chiaroscuro in red enamel. It is as heavily faceted. The addition of a contrasting concentric ring adds another layer of complexity. The 45-millimeter, 18-karat pink-gold case with a fancy bezel does not tone things down. Six years ago, when Knights of the Round Table came out, the watch was already thought of as lush. Well, Knights IV brings it further.

Regardless of rendition though, what defines all four Knights of the Round Table watches are, well, the 12 knights surrounding the dial. Each of the knights points his sword toward the center. In all four models these knights are/were depicted individually; they are not the same piece made several times over. Even the way each one holds his sword varies.

In Knights of the Round Table IV the knights are depicted in a way that calls to mind a technique called low poly art, a 3D computer graphics rendering with a mesh consisting of less polygonal facets. Usually it is used for real-time applications — like computer games. Cast in pink gold, the 3D warriors stand just 6.5 millimeters high and are sculpted, engraved and finished entirely by hand.

As the case had been in all four editions of the Excalibur Knights of the Round Table, powering the watches is Roger Dubuis’s celebrated cal. RD821. A 33-jewel, self-winding movement, it spins at 28,800vph and has a 48-power reserve. Every part of it is hand-finished. It gets the Poinçon de Geneve stamp of approval.

You could say that, in a reverse kind of way, it is the knights’ shining armor.