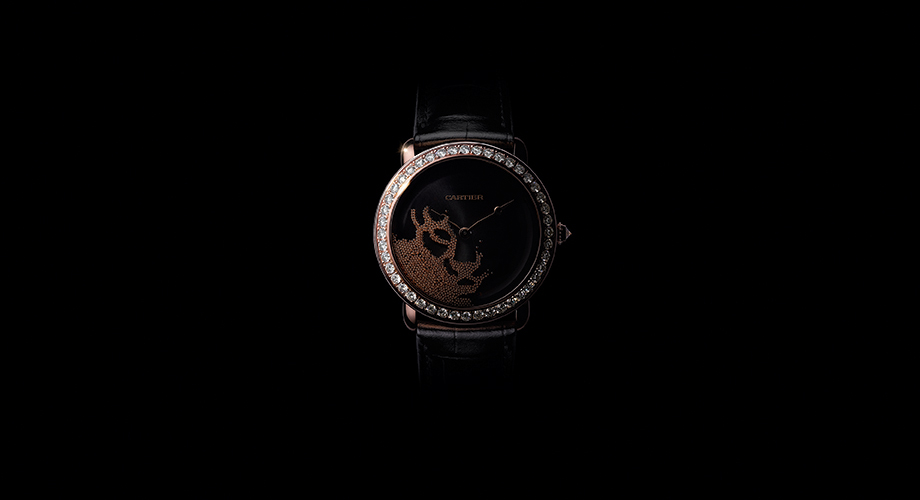 The Cartier Panther finds another incarnation, almost as fleeting as time itself. It is there and gone again, and it is frankly astonishing.

To look at the Cartier Revelation, you first see a dial covered with liquid. Pretty in itself, jewel-like, but simple enough. Then you notice some gold balls suspended within. A pretty effect, you might say.

But the true beauty of the Revelation can only be seen in motion. Tilt the watch face upwards, and ten let the gold balls cascade down over the dial. The gold momentarily falls through the outlined shape of a panther, caught for a moment as the flow traces the lines of the cat that was hiding within.

The effect is stunning, and it happens in a way I haven’t grasped. The methods by which the gold particles trail over the dial and leave the whispered image of a panther is no doubt fully explainable, I simply prefer the phenomenon unexplained.

‘…once again, Cartier has managed not only to delight, but to surprise as well.”

The Cartier craftspeople took years to develop this watch. Two patents were involved — interestingly, they seem to focus on the glass of the dial, and on the liquid itself. Naturally enough, the liquid and its container are a large part of what makes this timepiece such a wonder. If the liquid interacted wrongly with the pressure, or what have you, then a number of things could interfere. But the simple joy of seeing the flow of gold balls form the ghost of an outline tells us that once again, Cartier has managed not only to delight, but to surprise as well.

Cartier brings us another fabulous watch, suited for both men and women.