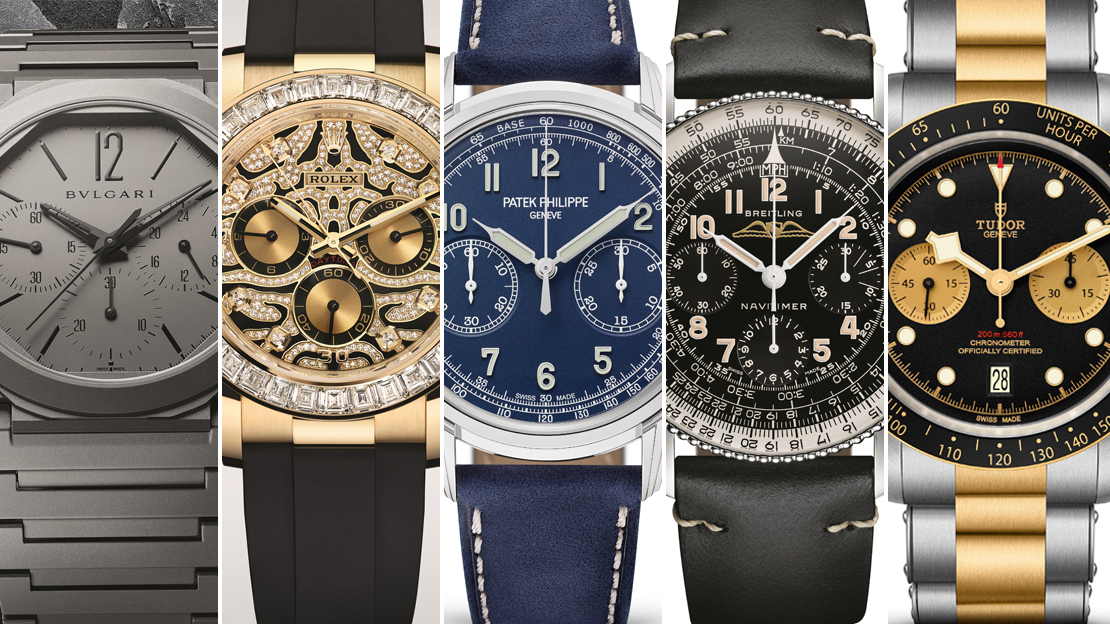 WHETHER Chronos/Cronus, the Greek god of time, or harvest (“chronos” is also the Greek word for “time”), is or is not Kronos, Zeus’s Titan father, we leave for scholars to debate. What is likely to be less contentious is that eventual Renaissance period depictions of Chronos/Cronus created the image of a harvesting scythe-wielding bearded man called Father Time. Now, by virtue of this, wouldn’t a chronograph be the perfect acquisition to celebrate Father’s Day?

Here are five “chronos” that should be on every dad’s wish list:

Bvlgari Octo Finissimo Chronograph GMT Automatic
Bvlgari scores another thinnest-something-or-other record for this watch. The Octo Finissimo Chronograph GMT has a movement only 3.3 millimeters’ high — the thinnest mechanical chronograph calibre ever. Which isn’t bad at all considering this in-house cal. BVL 318 is self-winding (the rotor resides on the periphery of the movement rather than on top) with a GMT function. And as thin as it is, it still has a 55-hour power reserve.

Covering the movement is a 42-millimeter-wide titanium case that is also extra-thin at 6.9 millimeters — making the watch the thinnest mechanical chronograph on record. On the sandblasted titanium dial are placed three registers; the one at 3 o’clock reads out the home time, at 6 o’clock is the 30-minute chronograph counter, and at 9 o’clock sits the small second display. The watch’s crown set is made from titanium and ceramic. The integrated bracelet is also sandblasted titanium.

Rolex Oyster Perpetual Cosmograph Daytona
Rolex this year continues to dress up its celebrated chronograph; where the 2018 version was marked by a bezel on which set were rainbow-colored sapphires, the new ref. 116588 sees its tachymeter scale replaced by 36 trapeze-cut diamonds. Adorning the dial are champagne-colored chronograph counters intertwined with black lacquer and diamonds. The hour markers are actually eight diamonds inside 18-karat yellow gold frames, and the Arabic numerals 15, 30 and 45 are made of 18-karat yellow gold. The case, 40 millimeters across, is made of 18-carat yellow gold, too.

Powering the Daytona is Rolex’s self-winding cal. 4130 whose chronograph is worked by a proper column wheel and a vertical clutch. Proprietary components include the blue Parachrom hairspring, which resists shock 10 times better than a traditional hairspring, and the Rolex overcoil, which guarantees a regular beat rate in any position. This movement, which has a 72-hour power reserve, is accurate to within two seconds per day.

Patek Philippe 5172G Chronograph
Patek Philippe’s first classical chronograph fitted with an in-house movement was the ref. 5170 of 2010, which was then reinterpreted in yellow, white and rose gold, and in platinum. This year this chronograph became the ref. 5172G, an even more classical piece (look at those white-gold baton hands!) housed in a white-gold 41-millimeter case with round guilloche pushers and three-tier lugs. A boxed sapphire crystal is a lovely vintage touch, too. Plus, the dial has turned blue with contrasting white-gold applied Arabic numerals. A small second register and a 30-minute counter complete the dial layout.

Ticking beneath the surface is the in-house, handwound cal. CH 29-535 PS chronograph with a column wheel and horizontal clutch. Adorning it are lavish finissage touches on the bridges, which in turn have chamfered and polished edges, as well as Cotes de Geneve décor. It stores power good for 65 hours if the chronograph isn’t always activated.

Breitling Navitimer Ref. 806 1959 Re-Edition
Breitling actually developed the Navitimer in 1952, but it was the iconic 1959 rendition of the model which the watchmaker, with good reason, recreated. And “recreated,” in this case, means exactly that.

The Navitimer 1959 Re-Edition is a true replica of the original watch. Its all-black dial with tone-on-tone subdials and rotating beaded bezel are identical. Its dial is adorned with a Breitling inscription in capital letters and an unsigned winged logo. Even the steel case, which measures 40.9 millimeters, is unique to the Ref. 806 as it wears the same lug profile and finish as the 1959 watch. The Navitimer’s circular slide rule, covered by a high-domed acrylic glass, is a copy of the vintage piece.

Suitably, the new in-house handwound cal. B09, based on Breitling’s renowned cal. B01, and which is COSC-certified and packs a 70-hour power reserve, resides within the 1959 Re-Edition.

Tudor Black Bay Chrono S&G
The Black Bay Chrono returned to Tudor’s lineup wearing a steel and gold attire — explaining the added “S&G” to its name. The watch gets plenty of gold touches — numerals, markers, hands, inscriptions — on its black bezel (fixed, with a tachymeter scale) and matte black dial. The pair of sub-registers are also in gold. Complementing the bezel and dial furniture are the gold crown and pair of chronograph pushers. The steel part in the S&G is supplied by the 41-millimeter case and, if opted for, the bracelet which, in turn, also flaunts center links in gold.

The Chrono part is taken care of Tudor’s self-winding cal. MT5813, which was spun off Breitling’s cal. B01. This means Tudor’s ticker is a properly tooled chronograph with a column wheel and a vertical clutch. It also has a silicon balance and a 45-minute counter. Plus, it has a 70-hour power reserve. It is COSC-certified, too.