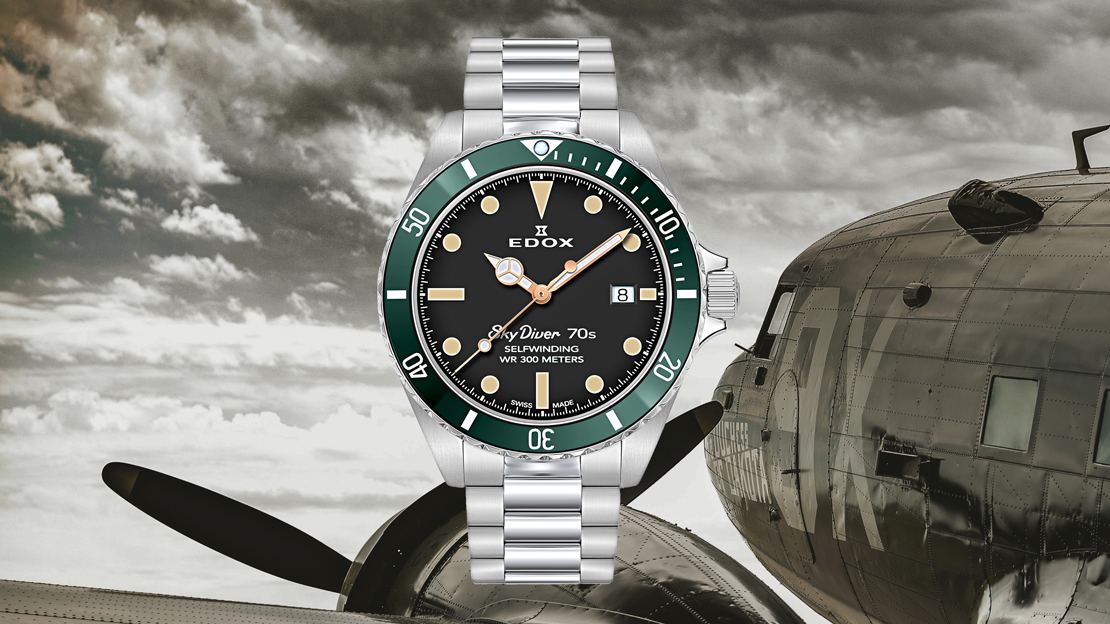 DID an anonymous Swiss colonel commissioned Edox to build several hundred examples of the SkyDiver (the figure 555 has been mentioned) for the elite mountain paratroopers under his command?

This puzzle is over Edox’s “long-lost timepiece.” The Swiss watchmaker narrates it found a design sketch for the watch (though the company does not say when), on which scrawled was the note “1973. Special production in strictly limited edition.” The discovery, according to Edox, rekindled interest on a “decades-old mystery.”

Edox says one of its watchmakers, long retired from service, believes this to be true. Some accounts even put an exact date — August 1, 1973 — as the day on which the SkyDiver was supposedly handed over to the paratroopers during a ceremony held in the Swiss Alps. Whether this is fact or fiction, though, remains a question.

What is certain is that the SkyDiver did make it to production. In fact, a cursory search for the watch online would invariably reveal a few pieces up for sale, including in forum posts dating 15 years back. Unfortunately, along with the returns are questions over the authenticity of certain examples out on the market.

Well, all this is addressed now. Because Edox at Baselworld 2019 brought out a faithful reincarnation of its enigmatic timepiece, which the watchmaker swears is as much a “homage to its 135-year history” as it is a response to aficionados’ hankerings for fine military timepieces.

Called the SkyDiver Military (and limited to just 555 examples, by the way), the new watch is instantly identifiable as a modern piece due to its dimensions — it measures 42 millimeters in diameter. But besides the contemporary size, its aesthetics is defined by classic mid-20th century dive-watch elements, namely a rotating bezel with indications in 10-minute increments, a graduated scale to 15 minutes, and a triangle-framed pearl marker at 0/60 minutes; an elongated triangle at 12 o’clock; bar indices for 3 o’clock (this is truncated to make way for a discreet date window), 6 o’clock and 9 o’clock; round hour markers for the rest; “Mercedes” hands; and a black dial.

To further the vintage vibe, Edox rendered the SkyDiver Military’s hour markers in beige to match the “gilt” on the hands, and also inscribed the watch’s name in retro fonts. The steel bracelet in which the new watch comes is also a dead ringer for the original. A leather strap is supplied with the watch, which in turn is presented in a leather pouch. Boosting its military character is the dark green hue of the bezel (updating the black bezel of the original model).

Now, while it’s easy to dismiss the SkyDiver Military as merely a gimmicky nostalgia piece, and one with an accompanying curious story to tell — well, make no mistake; this is a serious dive watch. Sealing the watch’s steel case on top is a sapphire crystal two millimeters’ thick. Serving this same duty on the opposite side is a screw-down solid caseback cover adorned with an engraving of a paratrooper logo. A screw-down crown completes the package that, as a result of all the sealing measures, is water-resistant to depths of 300 meters. Meanwhile, SuperLuminova X1 coating on the hands and indices guarantee visibility even in low light.

Ticking beneath the SkyDiver Military is Edox’s cal. 80, a self-winding movement that is a tweaked version of either an ETA 2824 or a Sellita SW200. Used by the brand in its other models, like the cult-favorite Hydro-Sub line of dive watches, this ticker is a proven workhorse and, thus, a perfect fit to the SkyDiver Military’s tool-like quality.