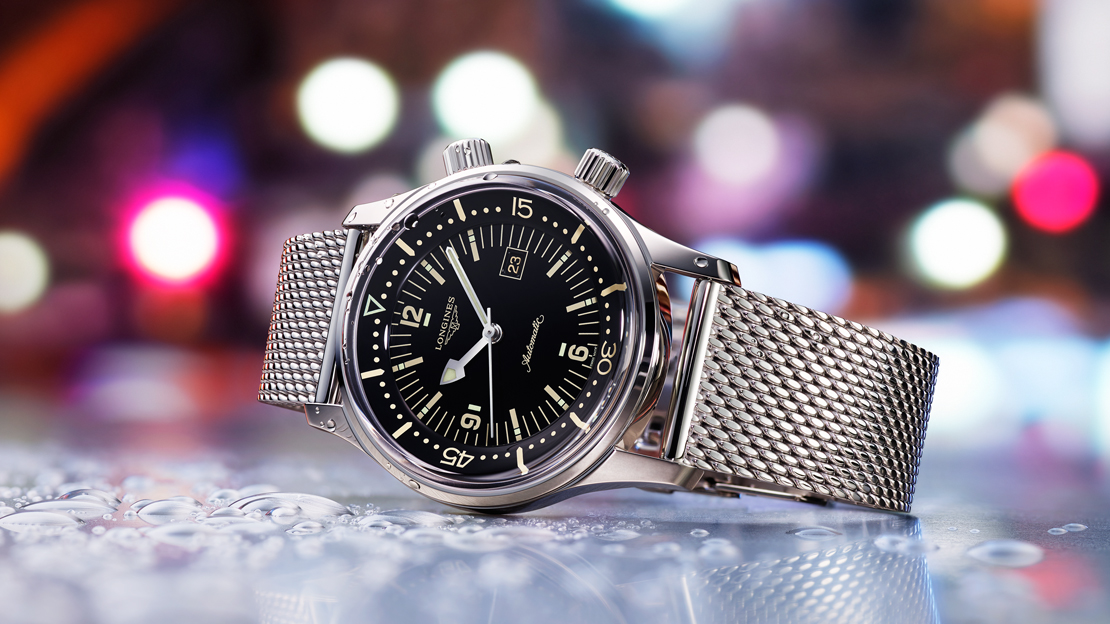 LAST year Longines reinterpreted one of its long-running sleeper hits, the Legend Diver. The watchmaker first brought out the no-date version of this model around 2007 (yes, it has been that long), and followed it up with a date window piece around 2009. The no-date disappeared four or five years after it came out.

Of course, the Legend Diver traces its roots back to the 1960s, and the current piece is actually a very faithful rendition of the original even if it receives a few modern touches. The dial furniture of the vintage and the reissue — it could be called as such — are identical, at once busy and tidy and extremely legible. The traits marking out the Super Compressor case built by E. Piquerez SA in the 1960s — screw-down caseback, cross hatching on the two crowns (one for the internal rotating bezel) — live on in the current watch. But the modern piece’s crowns are screw-in affairs, and domed sapphire crystal now covers its top. It has a serious depth rating of a little more than 300 meters, too.

In 2018, Longines expanded the Legend Diver line by introducing versions of it with dark dials instead of just black, as well as one in mother-of-pearl. Along with the dials, also changed was the Legend Diver’s case size; it turned into a petite 36 millimeters wide, down from a hefty 42 millimeters.

The downsized versions actually lent the Legend Diver a decidedly mid-20th century vibe. Watch sizes of the era, after all, mostly hover at just around 34 millimeters. The Legend Diver’s smaller variants also expand their appeal to ladies who might prefer a less chunky piece on their wrist (if not a mother-of-pearl dial).

Here’s the thing, though; as enthusiasts are all too aware of the original Legend Diver actually measured 42 millimeters across. The watch was huge then, the watch remains sizeable now. But, oddly enough, it is this aberration which lets the Legend Diver lose six millimeters without it getting disfigured in the transition. Arguably, the (36-millimeter) modern watch looks more vintage-y than the vintage piece.

Especially the model’s rendition for 2019. Longines simplified the 36mm line by discarding the purple, teal and burgundy dial color choices from last year, and retaining only the black (with which the 42mm model comes) and mother-of-pearl this time around. A third dial color choice this year (replacing the previous three colors) is simply stunning — gradated brown.

Certainly, this new dial color further boosts the Legend Diver 36mm’s retro aesthetics as it simulates the “tropical” effect found in some vintage watches (ageing and prolonged exposure to sunlight cause these watches’ black dials to turn into uneven, unpredictable shades of brown). The gradation Longines applied to the Legend Diver 36mm, light going dark toward the edge of the dial, approximates this quality via a nice bit of trompe l’oeil, matching best the cream numerals and inscriptions. The brown landscape also brings out the faint green accents more coherently than black could.

Carried over from the 42-millimeter model are SuperLuminova-coated hands, inner rotating bezel, date function and a stamped diver image on the solid caseback.

The Legend Diver 36mm relies on a movement different from the 42-millimeter version. Ticking beneath the smaller models is the self-winding cal. L592. This ETA A20.L11-based, 22-jewel calibre spins at 28,800vph and has a 40-hour power reserve. It also sees duty in numerous Longines models, like the 26-millimeter-wide Record watches.

In the Legend Diver 36mm, cocooning this movement is basically the same components of the 42-millimeter model. Which means the small watches still have a steel case and screw-down caseback, screw-in crowns and domed sapphire crystal cover. They retain their 300-meter water-resistance rating, too.

In short, the Legend Diver 36mm is scaled down — not downgraded.