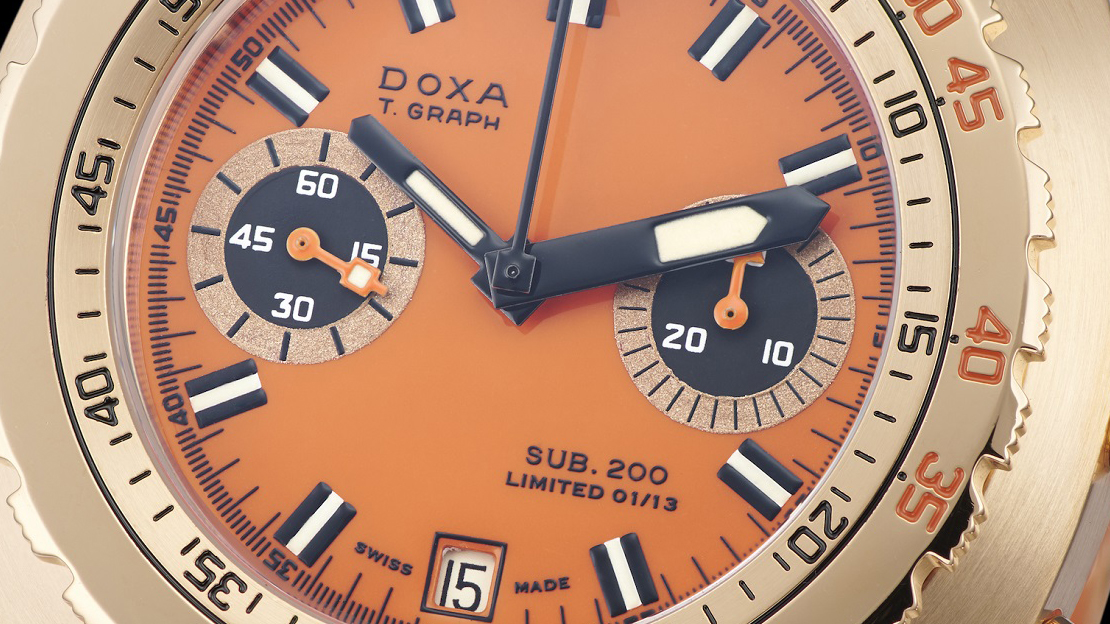 IS DOXA a cult favorite, appreciated only by a discerning and quite loyal following?

Well, what is certain is that the watchmaker is releasing at Baselworld 2019 a couple of limited-edition pieces both meant to mark the brand’s 130th anniversary and the 50th birthday of its, well, cult favorite timepiece.

Capped at only 13 pieces — to commemorate the 13 decades of Doxa — is the reimagined rendition of the Sub 200 T.Graph. The original model was released in 1969 as the chronograph spinoff of the first Sub 200, which, for its part, came out two years earlier. As it turns 50, the Sub 200 T.Graph gets to wear a 43-millimeter case in 18-karat gold. Like the original, the anniversary piece is water-resistant to a depth of 200 meters, and is still kitted with the feature for which the model earned its genuine tool watch cred — a unidirectional rotating bezel with indications for the dive time in minutes and the depth in feet.

Rightfully so, the Sub 200 T.Graph remake also retains its chronograph function. The subdial at 9 o’clock reads out the small seconds, the one at 3 o’clock counts up to 30 minutes. More important, the watch’s timekeeping functions are taken care of by a period-correct Valjoux cal. 7734. This handwound movement, among Valjoux’s best, beats at 18,000vph and has a power reserve of around 45 hours. Now, one other good thing in this particular case is that all 13 watches get original movements Doxa says it has kept — and preserved — in the company’s facilities for the last 30 years.

What other definitive element that continues on in the commemorative Sub 200 T.Graph is the orange dial, a bold departure from the dive watches’ dials of the era. Over this blazing landscape sits baton hands coated with Super-Luminova. Beige “light old radium” inserts on the tip of the hands, as well as the markers, add both luminescence and a vintage-y feel to the watch. An orange strap, or an optional 18-karat rice-bead mesh bracelet, completes the look.

As can be expected, all 13 watches are numbered — on the dial, at that — and have special engravings on the caseback.

The second Doxa anniversary piece is the Sub 200, limited to 130 examples, and is intended to herald the release at the end of the year a new collection from the brand. The reissue comes in a 42-millimeter steel case.

Tracing its roots back to the 1967 edition of what is now known as Baselworld, the new Sub 200 remains faithful to the original via a domed glass cover (all right, the new one opts for sapphire crystal rather than plexi-glass) and a unidirectional bezel marked by the retro-looking light old radium on its gradations. The watch’s baton hands and applied indices also receive dabs of this beige material, as well as Super-Luminova.

Just like the original model, the reissue piece is water-resistant to 200 meters. It also pays homage to Doxa through a caseback engraved with “130 Years,” and a rice-bead mesh bracelet with a diving extension folding clasp. Ticking beneath the surface is the venerable cal. ETA 2824-2, a self-winding workhorse of a movement that’s both a cult classic and a mainstream favorite.

There’s no reason why Doxa shouldn’t be one, too.